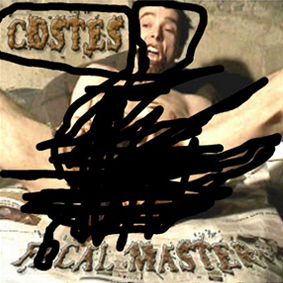 Shortly after leaving dock on the beautifully crafted sail-boat of wonder that is Fecal Master, the listener is hit with a startling insight. They are forced to realize that their eyes are covered in poop. This awakened spirit now understands that they have never seen the light of day.

However, this journey to awareness only begins after Mr. Jean Louis Costes makes something clear. Every day when Mr. Costes wakes up, he looks at his butt in the mirror and says, “Okay, I'm still the Fecal Master. I'm born Fecal Master and I will die Fecal Master too and it's okay.” Unfortunately, you then learn that he is not exactly “okay” . Being the Fecal Master in the year 2004 is a hard job; it comes with such taxing duties as 1. Finding Sh*t Girl and defeating Pee-Man 2. Speaking semi-broken English with a very overbearing French accent. 3. Telling “girl who listen to my song” that “my email is costes@costes.org please send me an email”. On top of all that comes the doody of having to record samples of yourself yelling about poop, and then having to layer them over other samples of yourself yelling about poop. Being the Fecal Master is no easy task, yet Costes very much chose this role voluntarily. You ask yourself, "Why would a man choose to become the Fecal Master?". Then, as you delve further into the album, you learn Costes is sacrificing himself for the good of mankind.

There is no denying that Costes's 33rd (?) musical endeavour is one that needed to be made. We live in a world filled with easily ignored issues like war, rampant poverty, and global warming. This chaos is only perpetuated by the lamestream media. They never cover issues that really matter, the ones that torment and demoralize peaceful individuals like the Excrement Emperor. One needs only to look at the cover of this album (or view the tracklisting) to see that Costes is a kind-hearted soul. He is a blue-eyed angel desperate for change. He is a man who cares about the state of the world and wants for nothing but peace. Songs such as Media Sh*t tackle the ignorance of news outlets worldwide with a soulful rebel yell. The words “Media sh*t vomit” are luxuriously bellowed in repetition over a course of three minutes, and the listener is led to question the dangling carrot they have been following all their life. “Is this really what the world should be worried about? Are these really the ideals I want to believe in?” they ask themselves. Their thoughts are eased into a armchair made of clouds and are allowed to focus. There, they gently rock back and forth to the music and question the state of humanity. The peacefulness is escalated as Costes sets metaphorical butterflies of freedom free, letting them swoop into the listener's ear canals, “masturbating my butthole...licking my fingers... I don't know why i am love with my sh*t i just dont know why”. It is hard to deny that there is a plethora of things to be extracted from Costes's thoughtful musings. Fortunately, while this confusing enlightenment is taking place, one cannot help feeling like they are at home wearing slippers and drinking tea.

The album relies heavily on Costes's spoken-word brilliance. However, the supporting music has a different and alluring gleam all unto itself. Glistening, heavenly power-electronics and ethereal, twinkling excerpts of static make brief appearances in between masterfully forged synth loops. Just when you are at the edge of your seat, thinking the song has nothing more to offer, Costes performs a devilish pirouette. Instead of yelling in your ear about poop, he yells in your ear about poop with reverberating vocals that are mastered at around 300% the volume of the rest of the track. It's moments that like these that set Costes ahead of the pack; the very competitive crowd that is making modern French feces-related outsider performance art.

This is a hard album to judge. It is defiance at it's brownest and slipperiest. It is simultaneously a cry for help, and a call to arms. It is not something to listen to while you go to the gym, or while you take a poop at the gym. It is a movement that requires that the utmost attention and care. If Beethoven were alive today, one could believe that a movement such as this belonged to him. A movement performed in some back alley. A genius playing privy a select audience of ants. These simpletons have no desire to consume such transcendental art, no way of understanding it, yet need to in order to grow.

This beauty and heartfelt words in this album will render you speechless. It is a journey through treacherous waters burdened with mystical brown logs. When you get to the light at the end of the tunnel, who knows what path you will take. Maybe you will be driven to become the next President of the U.S. Maybe you will reject this humble sensei's teachings and go on a rampage, displacing fecal matter onto every woman and child in sight. Although there are no hard facts concerning the illuminated aftermath, one thing is very true. Costes is indeed the Fecal Master, and we should thank him for it