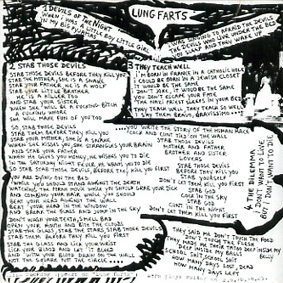 When Costes was eight years old, his father took out his hairy, erect penis and said : "Come and look close at this. In some years yours will grow big and hairy like this. I want you to see mine now so that you will not be afraid when it happens to you". Madame Costes sat in a hard chair a bit away, smiling a small smile, as she always does.
The Costes family was a strict catholic family. Confused little Costes learned duty well. When he left his family house at the age of twenty-six, he kept that sense of duty, but it was no longer to God... It was now a duty to his own fame. In the last six years Costes as made available to the public over fifty hours of music on cassette, LP, and CD. He has also performed over fifty shows, seven of which are on video. And on each one of those cassettes, LPs and CDs, and in everyone of those shows, he has made himself in everything the rich catholic women and the strict Army men hate, fear, keep secret, and secretly are. Costes wants you to come very close and look at his hairy, erect penis.
Lung Farts is full of penises, some erect and some unable. It's as full of Costes' broken, screeching, yelling voice. He loves his voice so much, and he is so afraid you might ignore it that he has turned it up to 10, so you can merely hear the music behind it. The music is a wreck of synthetiser squeaks, banged tin, and frenzied, out-of-tune guitar.
First Costes sings all his Defecating Ecstasy songs ("My cock is my puppy looking for poops", "Fart in my face", etc...). Then come all his homosexual songs ("I'm not a faggot but why not? I don't like to see the poor boy sad, holding his hard cock; don't be sad, come in my bum!"). Then he sings his anti-cunt songs ("I see the truth, a dirty hole full of cheese. Love is alie"). And then he falls in love!? (Oh brightest star in my sky..."). She leaves him, he "wants to sleep in her ashes". But he always wanted her to leave him; it was the dead ashes he was in love with all along. He loves the photos, the video image, and his own fantasies. "The lovers leave but the mirror stays".
Costes is a lonely old man making stories in his little cardboard studio in France. "I'm a queer. I'm playing my bad guitar alone in a basement and my guitar is never loud enough. I'm a queer, I'm stupid. My shoes are the wrong shoes. My shoes are too small for my feet, and my socks are stinking. And I'm eating only bread with eggs. It's bad for my cholesterol. I don't know what to say, I don't know good english. I should shut up, shut up. I'm a poor queer alone in his basement. I make music waiting for the death.”