Hung By The Dick 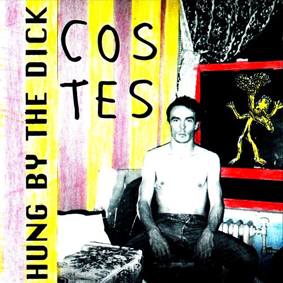 The French Costes is back with another album. This one is about being crazy because a dick lives in his brain. This is the most far-out over the top Costes to date! Sex pervert or Artist Fag Genius? Who cares, with selections like: Himalaya of Shit, Heil Fuck Me Harder, Anti-Costes Crusade, Logic & Mathematic, A Costes Life and Hung By the Dick, 30 tracks in all. Comes with illustrated lyric book, limited to 500 copies. Blazing casios & techno beats, spastic singing, sensitive thoughts and utter madness make this the must have Costes release of the summer!

Listening to Hung By The Dick, it doesn't take very long to figure out that Costes is a bigoted, phallocentric, scatological Frenchman with a misanthropic hatred for every institution imaginable. The scrawl on the back cover says it all: "I hate my race, I hate myself, but I like my dick."
And so Costes begins his confrontational diatribe with "Jacques Cousteau Tells the Truth to the Nation" — a vituperative obloquy aimed at America. Narrating from a detached third person point of view, Costes informs us that foreigners predominate the arts in America, and that "in the music, those fucking niggers rule! Look at this Michael Jackson shit all the time on the TV!" Then he goes on to inform us that Costes dominates the music business in America, and that he must be stopped. His heavy French accent, painfully broken English, poor grammar and unhinged psychotic demeanor add up to one of the most amusingly offensive albums I've ever had the displeasure to hear.
I cannot enjoy Hung By The Dick; enjoying these willfully bigoted soliloquies is beside the point. The value of Costes' work — if indeed there is any — lies entirely in the fascination of exploring the hefty collection of mental disorders which are vomited up like poisonous bile for the listener to dissect and analyze. He is very obviously preoccupied by sex, and in particular, the size of his genitals. On "A Dick in the Brain," he gives his audience a peek at his bizarre thought processes: "The dick moves in my brain...it fucks my brain. That's why I'm so weird," and later: "OK cunts, OK assholes, you've got my Costes Cock, big, heavy, full of sperm just for you. I'm going to fuck you until you die." His delivery is Antonin Artaud meets G.G. Allin meets Boyd Rice. Throughout the album, Costes behaves like an insane primate, jumping up and down, feverishly masturbating and throwing his feces at anyone within range. He grasps desperately at anything that he thinks might offend the listener. Racism, scatology, homophophia, homoeroticism, Nazi sentiments, misogyny and violent, megalomaniacal attitudes are all fair game for this particular round of aggression and insults: "Please let me kill this black guy...I know an evil black woman. She fucks me every night with her big black dick."
The lyric sheet is scrawled with handwritten messages that display Costes' complex inner schizoid: "I'm sorry to sing bad things. I don't know why I do that." The liner notes are adorned with pornographic pictures of Costes himself, half-naked and masturbating, attempting to spew his semen into his own open mouth. Also adorning the sleeve artwork are childlike illustrations showing men being strangled by their own penises. There is very little music accompanying his brutal multitracked screams — mostly just strangled Casio keyboards, grating noise, or the sounds of a constipated Costes struggling to push out a bowel movement. When he finally pinches a loaf he screams: "My God! I can't believe it! My shit is yellow! Why is it yellow?"
This is as pure a specimen of true insanity as one is likely to hear. It's very difficult for me to figure out how much of Hung By The Dick is a sick joke, and how much may actually be genuine. Looking at Costes' hilariously offensive website [http://costes.org] does not make matters any clearer. Either way, depending upon the listener's sensibilities, this album is either an abomination of Biblical proportions, or just a sometimes frightening, often wickedly funny and always provocative collection of aggravated vocal assaults.

What can I say, Costes has been doing his "thing" for a long time now and I hope he will continue for ever! Perversions, cheap keyboards, provocations & Love!! Recorded material from 1993.